Welcome to the online gallery of Don Gillespie 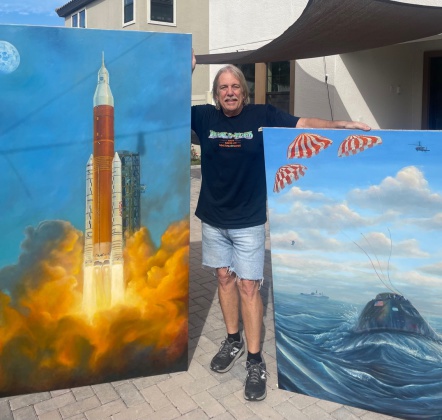 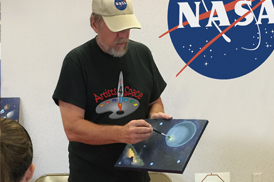 2017 will be the 2nd year teaching STEAM based art classes in Tampa, Cocoa Beach, and New York. The program is designed to inspire the next generation of creative space explorers. It's a multi-faceted, program that revolves around the creation of aerospace concept art and design. The project includes on-site painting demonstrations at the Kennedy Space Center Visitor Complex, multi-media presentations ,art lessons for both children and adults, and art shows that include works by past aerospace artists, current artists, and students. For more information visit www.artists4space.com

Thank you to the Barbaro-Gould Foundation for awarding their 2015 Artist of the Year to Don Gillespie. 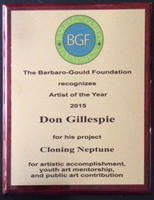 Don Gillespie recently joined with 30 other artists to participate in The Exquisite Corpse International 2015 game. The Exquisite Corpse is a game has been played for almost 100 years. The show was unveiled at the St. Petersburg Museum of Fine Art on November 12th 2015. The show is on display along with other works of the participating artists at Gallery 1356, in Clearwater Florida until February 5th 2016. It will then begin a tour to other locations around the country and overseas. 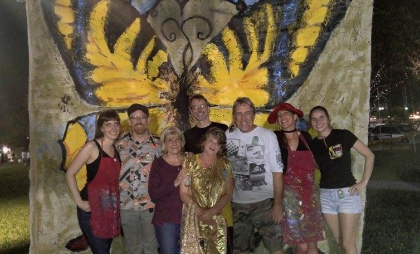 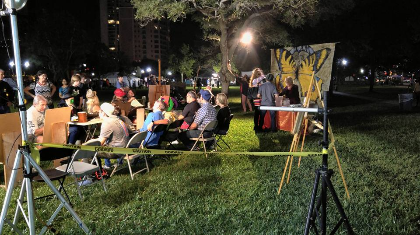 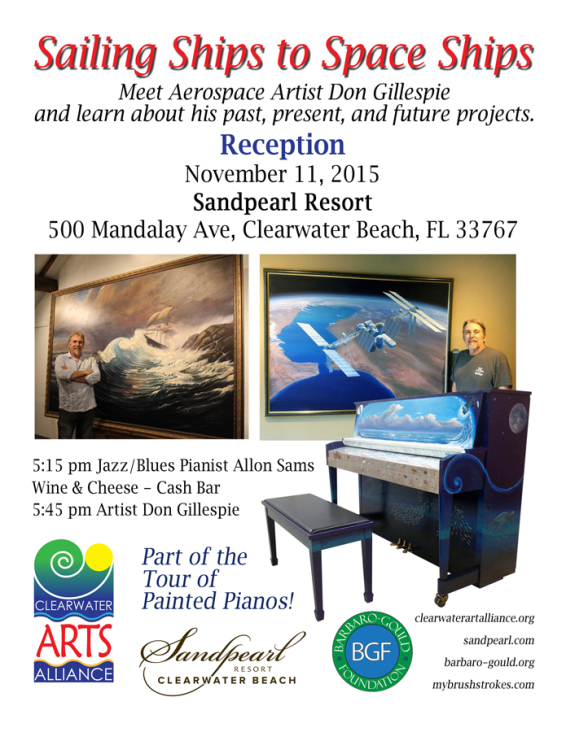 For the latest news on the Cloning Neptune Project click this link for the Blogging Neptune Page! 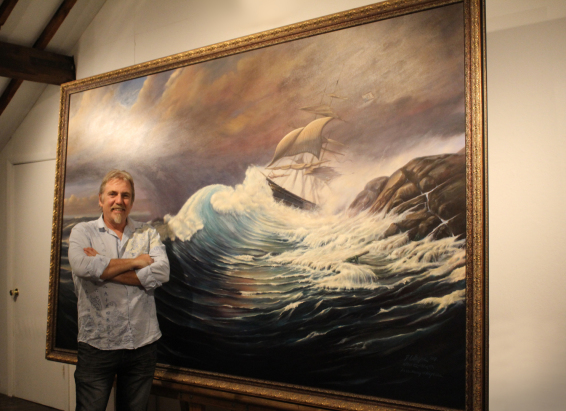 The finished painting "At the Mercy of Neptune" after C. H. Grant

For many years I was a concept artist for the space program, painting the future of space travel and interstellar exploration. Several years ago I became intrigued with the great marine painters of the 1800s, the artists of exploration in their day.

In particular, I was drawn to the painters that were born in Oswego, New York, who became nationally recognized artists for their work. Many who now live in Oswego are unaware of the talent that this area produced in the late 19th century, artists such as James G. Tyler and Charles H. Grant. My desire was to inspire others by recognizing and celebrating these kindred spirits.

I embarked on an ambitious project in the summer of 2015 in Oswego, where I recreated a full scale replica of Charles Henry Grant’s seminal work, “At the Mercy of Neptune.” The 9ft by 5ft marine painting seemed to have been lost to the depths of time, but through rare photos and other related works, I used the techniques of both Mr. Grant and his instructor, the famous Dutch-American master marine painter, Mauritz Frederick Hendrik de Haas to reconstruct this masterpiece.

The project was documened in a blog section of this web site titled Blogging Neptune.

Grant was born in Oswego in 1866. He became inspired to paint at an early age and became a student of de Haas at The National Academy of Design in New York City. Grant later moved to San Francisco, where he gained much notoriety for his marine paintings. He then traveled with the United States Navy as their official artists when the fleet sailed to Australia in 1925.

Interestingly, “At the Mercy of Neptune” was first displayed in 1896 on Bridge St. in Oswego: at my great grandfather W. R. Shayes’ art gallery and photography studio.  The painting was seriously damaged in a mysterious gallery fire later that year. The repaired painting was shown at the New York State Fair in 1897 and received rave reviews. The painting was eventually purchased by a prominent judge named L.C. Rowe and hung in his residence in Oswego for many years until his death in 1928. It was bequeathed to his wife Emma and from there, its fate is uncertain.

The H. Lee White Marine Museum agreed to allow me to paint the reproduction in residence at their facility. The finished painting was donated to the museum and hangs prominently in the main gallery.

In conjunction with that ambitious project, I gave presentations about the artists to interested groups. I finished the painting at the New York State Fair, painting live in front of thousands of peple answering question and listening to their stories, what an awsome experience!

I also arranged an art show of marine pieces by local artists, children artists, and included original works of these 19th century artists.
Art is an essential ingredient to a healthy community and can be a strong economic driver. It is important to encourage all ages to express their creativity, and this project did just that while educating through truly inspiring historical figures from Oswego County.

The Barbaro-Gould Foundation, a not for profit 501(c)(3), whose mission is to facilitate the global exchange of culture through art, assisted me in raising funds for the project. All donations through Barbaro-Gould are tax deductible.

Welcome to the on-line gallery of Don Gillespie. This collection of paintings represents a life of art. They are unique visions created with traditional brush and paint. Art is a vehicle which helps us gain an understanding of who we are, where we come from, and where we are going. The artist hopes that they inspire you to pick up a brush or whatever vehicle you prefer and travel beyond the surface.﻿ 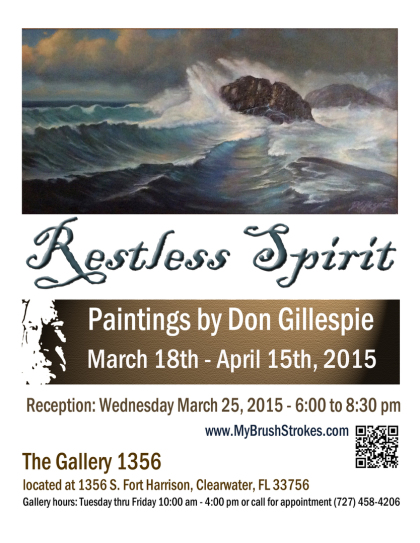 A project for a good cause. 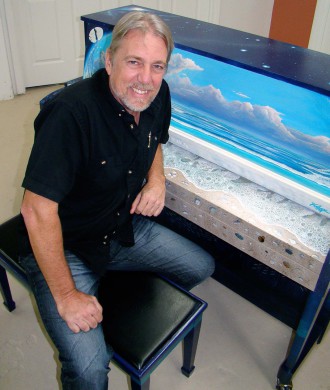 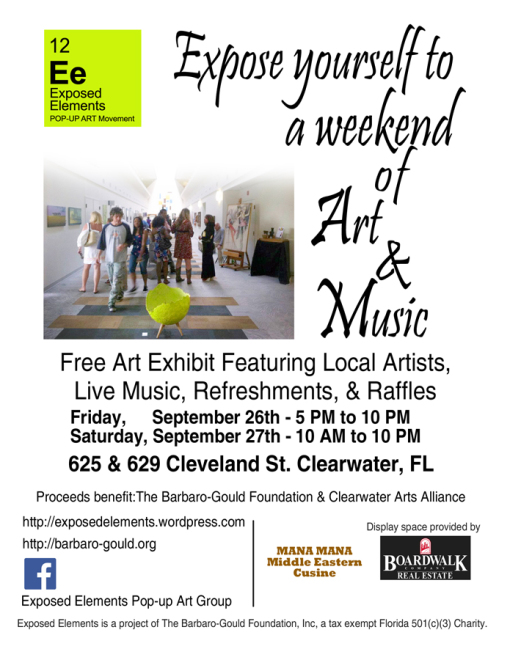 Click here to learn more about the Kindred Spirits Exhibit in Oswego New York, May 17th to Aug 31st 2014. 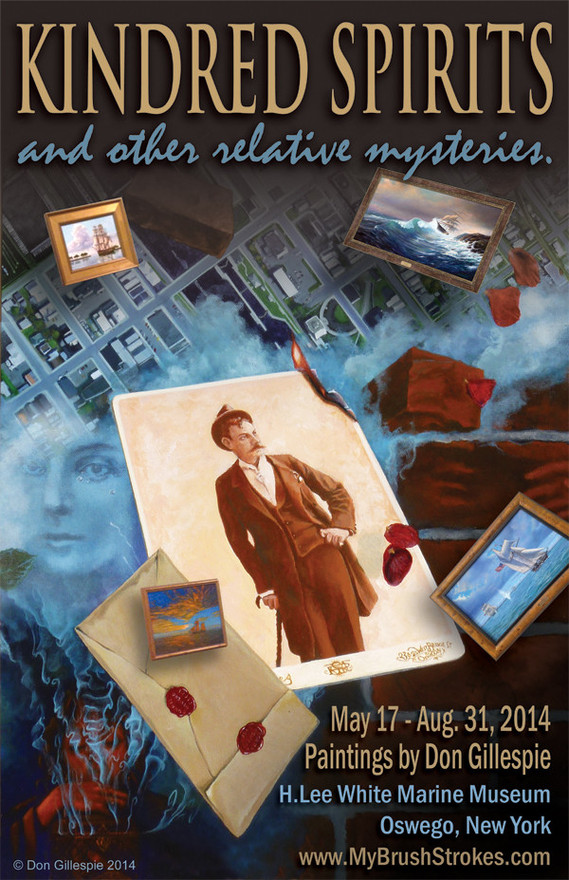 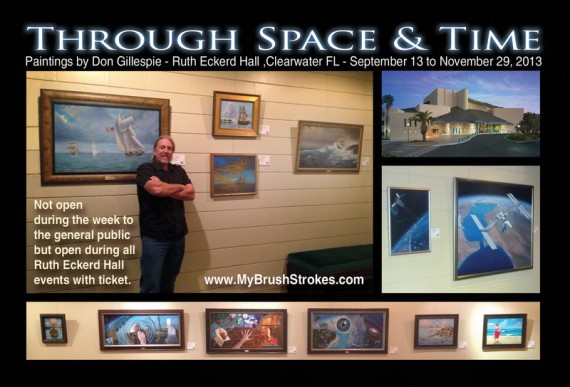 Don Gillespie’s art exhibit “Through Space and Time” will be on display at Ruth Eckerd Hall’s West Gallery from September 13th to November 29th 2013.

Gillespie’s paintings span a 35 year art career, ranging from his early days as an aerospace artist to recent works. The 27 paintings include Oils, Acrylics, and Watercolors. They are a diverse collection of artist concepts, introspective surrealism, fantasies that include local landmarks, and traditional period pieces. Gillespie’s artwork has been displayed around the world including New York, London, and Paris.

The galleries are not open during the week to the general public but are open during all Ruth Eckerd Hall events. A ticket to the scheduled event is required for entry. 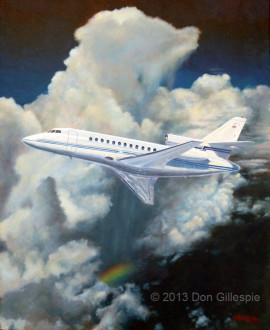 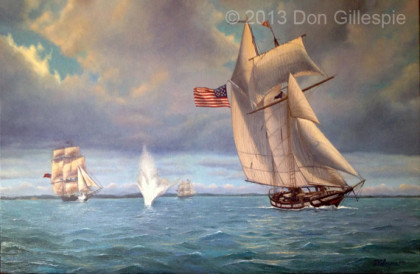 "Out of Range" Outbound for France

Don Gillespie's paintings span a career of over 35 years. From Aerospace to Medical Illustration, he has worked with many diverse subjects﻿ and mediums﻿ including interactive multimedia. His medium of choice is traditional paint on canvas.  To view his latest paintings please click here.﻿ 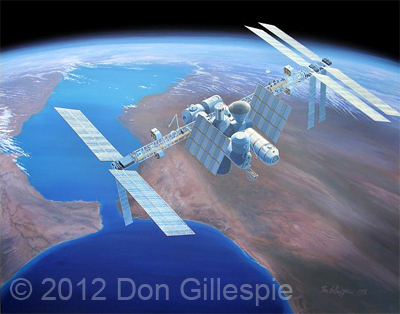 As an Aerospace and freelance artist, Don's paintings have helped many concepts and dreams literally get off the ground. To view some of these paintings click here.﻿

All images at MyBrushStrokes.com are covered by Don Gillespie copyrights. Reproduction of images by any means, without written permission, is strictly prohibited.﻿﻿

Learn the latest news on, "Cloning Neptune" by clicking here and follow : 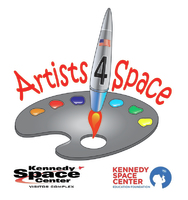 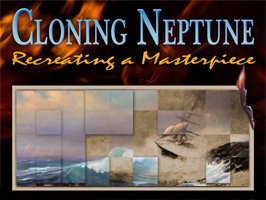 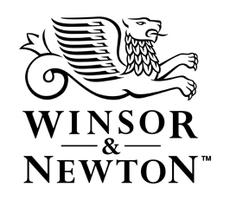 Cloning Neptune is honored to be sponsored by Winsor & Newton, 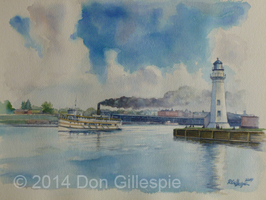 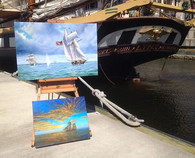 Here are 2 fine art canvas giclee prints of my paintings which will be auctioned at the 2014 Annual 1812 Lynx Fundraiser event on March 8th at the St. Petersbug Yacht Club, St. Pete, FL.

A BIG THANK YOU to Jerri and Scott Menaul of The Canvas Zoo for these excellent Fine Art Canvas Giclees . 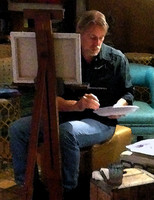 Painting in the Lobby of the Vinoy Renaissance Hotel, St.Pete Fl.

This series of transparent watercolors were created to help raise funds for the homeless in Tampa. Click here to view more 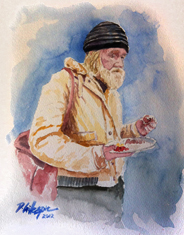 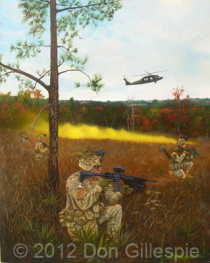 Welcome to the on-line gallery of Don Gillespie. This collection of paintings represents a life of art. They are unique visions created with traditional brush and paint. Art is a vehicle which helps us gain a better understanding of ourselves, our dreams and aspirations. It helps us to understand our world and to put it into perspective. The artist hopes that they inspire you to pick up a brush or whatever vehicle you prefer and travel beyond the surface.﻿